Rotary is a worldwide organization of more than 1.2 million business, professional, and community leaders. Members of Rotary clubs, known as Rotarians, provide humanitarian service, encourage high ethical standards in all vocations, and help build goodwill and peace in the world.

There are 33,000 Rotary clubs in more than 200 countries and geographical areas. Clubs are nonpolitical, nonreligious, and open to all cultures, races, and creeds. As signified by the motto Service Above Self, Rotary’s main objective is service — in the community, in the workplace, and throughout the world.

Rotary was founded by attorney Paul Harris, who wanted to create a professional group with the same friendly spirit he felt in the small towns of his youth. In 23 February 1905 he met with three others in Chicago. They decided to call the club Rotary after the practice of rotating meeting locations. The Logan Rotary Club was founded in 1920. The Lancaster Rotary Club assisted in establishing our club. Initially the Logan Club met for many years in the Ambrose Hotel, where the PNC Bank is now located. When I joined the Club in 1974 we were meeting in the basement meeting room of Blosser’s restaurant. I remember that the year after I joined, Marion Riggs was president, and he did a good job.

Judge Harley Meyer, now deceased, was the club secretary and treasure for nearly 50 years. When I was president, we got everyone to chip in and surprised him with a Paul Harris Fellowship, the club’s second after Mr. Elberfeld.

Part of our Quarterly Dues is sent to Rotary International to support the worldwide humanitarian effort.
[wp-rss-aggregator]

The Four-Way Test is a nonpartisan and nonsectarian ethical guide for Rotarians to use for their personal and professional relationships. 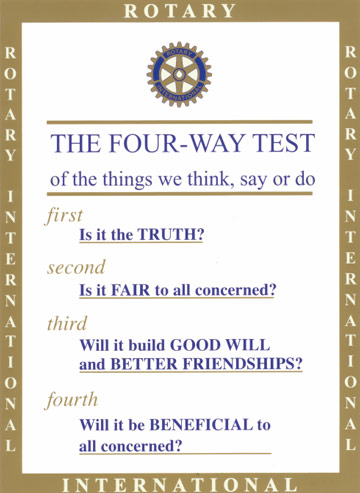